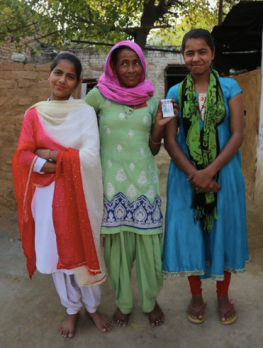 Nirmala and her family live together in a small house in Sirohi village, Haryana – around an hour away from Delhi. Her family belongs to a community of potters and also owns two buffaloes to supplement their income. Her father had been ill for quite some time and the doctors diagnosed it as possible tuberculosis. As he was unable to work, the burden of supporting the family fell on Nirmala’s mother and older brother.

Nirmala is studying in class 11 and is very athletic . Her dream is to become a police officer. “So many women are treated badly around me and there is no way for me to help now. But if I become a police officer I can make the village safer for everybody.” Nirmala said determinedly. She is being supported by the Laksh Foundation to complete her studies and prepare for the Police Entrance Exam. She is a teacher for class 2 students there as well.

Her sister Bharti is studying for her class 12 exams at the local Government school and hopes to be a teacher.

The community does not support the higher education of girls and are disapproving of girls who don’t get married early. Nirmala and Bharti confessed that they are constantly taunted and questioned when they step out of the home.

Rajvati, their mother, is a feisty talkative woman who has great dreams for her daughters. “Marriage should not be compulsory. I want my daughters to be educated and become independent women with a good character.” she said. She has been the mains source of strength and support for her daughters.